Joshua Daugereau once gave the readers  of  the precious PREACHERS AND PREACHING Blog an approximate sense of key statements that were made throughout the session of Shepherds Conference 2016, as well as allowing them to trace the flow of the argument. (What follows is not intended to be a full or exact transcript of what was said.) 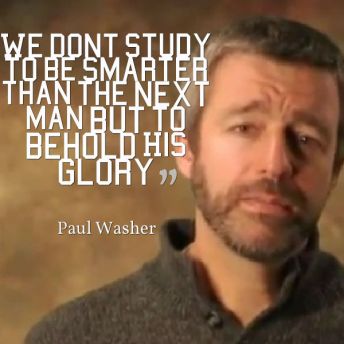 But He has made us ambassadors of Christ!

Brethren you need a deeper, wider and higher view of Christ! That is what people need to see. That is the terrible pain, burden, and beauty of the preacher.

It is our primary task to be in his courts and on his doorsteps. We need to cry out, “Oh God am I not a preacher! Consume my heart with Christ that I might proclaim Him and that seeing Christ they might see Him and say, ‘It is enough.’”

We embark upon something this afternoon that will end in failure for language fails.

The Gospel of Jesus Christ outshines all other doctrines. This is the one cure for all of the maladies of everything in your churches. The Gospel. Know it!

Be a man who dwells in your studies so that on Sunday you can go into your pulpits and be able to say something deep from God.

There is so much that we need to understand before we get to this text. You must study the attributes of God until you BURN with them. In that light, every dark spot will be clearly seen.

We must understand first the great dilemma, the divine dilemma, which is, How can God be just?

Exodus 34: He says, “By no means will he live the guilty unpunished.”

Ps. 32:1. Listen to what it says, God covers sin. How can a holy and just God cover sin? David should die. Adam  should die, Noah should die.

Proverbs 17:15. We get into the New Testament we hear praises of men and angels about how God justifies the wicked. But here is the great problem, anyone who justifies the wicked is an abomination to the Lord. This is the problem of the Gospel which is not preached about today.

Micah 7:18-19. God did not take your sin off as if it was an impersonal thing and throw it into the sea. He took it off you and laid it on the perfect Christ.

He took the sin off His elect and the church and rolled it up and put it on Christ and threw Him into the sea of His wrath.

It was the propitiation of Christ that satisfied God’s justice and quenches his wrath.

What do you think is the greatest sin. Do you think that it is failing to love the Lord your God with all your heart soul mind and strength? There has NEVER been a single person who has ever lived, among the billions of Adam’s seed was ever a person who could do that. But Christ did that at every second. Look at this man Jesus and what He did! Our victory and Champion did what we could never do.

Think of having an Olympic lifter next to me and we both have 315 pounds. I tremble but he is fine. Now add 8 plates of weight and he doesn’t even break a sweat but I have crumbled. Christ stood his ground in every way when temptation was heaped and heaped on him. He is a true champion!

What does it mean that he was made sin?

The moment we believed in Christ, were we transformed into perfect beings? Absolutely not. But Christ’s righteousness was imputed to us. We were forensically and legally declared to be right before the the throne of God and He treats us as righteous.

So how did Christ become sin? On Calvary all of our sins were imputed to Him and He was declared legally guilty and He was treated as such.

Do you see that He became sin? We were born in sin and we drink it like water, how can we know what it means to bear sin for a man who has never known sin?

This text tells us that Christ became sin and you tell me, “STOP! Paul just stop.”

But just when you think that it can’t get worse, Paul takes us to Galatians 3.

The sinner, not only before God, but before every holy creature in heaven, the last thing that sinner will hear when he takes his first step into hell, he will hear all of heaven applauding God for ridding the earth of him. Yet we read that, “Christ redeemed us from the curse of the law by becoming a curse for us—for it is written, ‘Cursed is everyone who is hanged on a tree.’”

It takes my breath away to think of Christ. This is the source of salvation­– this what makes missionaries and street preachers. It will not allow us to remain silent. He became a curse.

Every gift of God should be collected in a box of our heart and sealed. Everything that we have is bought with the blood of Christ.

If we were to look in Deut 27 and 28, we see something with the camp of Israel. They are divided among two mountains and half are to callout God’s blessing while the other screams out the curses.

Common grace is so overlooked. Every place you go and every breath you take you would only hear resounding in your ears over and over, “Cursed, cursed, cursed!” But our elder brother, covenant keeper, the victor the Champion, came and took our place.

He was cursed. There he stood, uncovered and unprotected and vulnerable to every recourse of divine judgment against us. If a man is counted as blessed it is because Christ was counted as cursed.

How can God do bless sinners? Only because Christ carried the curse on the cross. Let’s go to the garden with the time we have left now.

Easter is coming and I dread it because of the sermons that we will hear. Many sermons will tell the people of the agony of the physical pain which was real, but that is not why we were justified.

Atonement was not accomplished through the physical beatings of the Jewish leaders and the Roman soldiers. It pleased the Lord to crush Him.

On Calvary Christ took our sin and took the mighty wrath of God! This is not cosmic child abuse! When I hear that I don’t know whether to cry or go to battle!

You want to know how one man, dying for a few short hours on a cross could save men! Because of who that one man is. Christ outweighs all good things. He outweighs them all.

Brethren, this is the One whom we chase after. So, GO TO YOUR STUDIES! Go!

One of my favorite writers John Flavel and he writes:

Father. My son, here is a company of poor miserable souls, that have utterly undone themselves, and now lie open to my justice! Justice demands satisfaction for them, or it will satisfy itself in the eternal ruin of them: What shall be done for these souls?

Son. O my Father, such is my love to, and pity for them, that rather than they shall perish eternally, I will be responsible for them as their Surety; bring in all thy bills, that I may see what they owe thee; Lord, bring them all in, that there may be no after-reckonings with them; at my hand shalt thou require it. I will rather choose to suffer thy wrath than they should suffer it: upon me, my Father, upon me be all their debt.

Father. But, my Son, if thou undertake for them, thou must reckon to pay the last mite, expect no abatements; if I spare them, I will not spare thee.

Son. Content, Father, let it be so; charge it all upon me, I am able to discharge it: and though it prove a kind of undoing to me, though it impoverish all my riches, empty all my treasures, (for so indeed it did, 2 Cor. 8: 9. “Though he was rich, yet for our sakes he became poor”) yet I am content to undertake it.

One of the greatest narratives of the Old Testament was Abraham. Listen to the language. “Take now your son, your only son.” You can see the old man making his way towards the mountain, stretches his son, takes the flint knife and stretches back his hand and at that moment his hand is stayed.

He is told that Jehovah Jireh has prepared a ram. All of us hear that story and we think that it is a beautiful ending but it is not the ending, only the intermission. Centuries roll by and a curtain is closed to be opened 2000 years ago and there hangs God’s son on a cross, his only son whom He loves and He takes the knife out of Abraham’s hand and slays His son!

We are ambassadors of this treasure? FLEE from here and go to your studies and seek Him out! That you may know more so that your people will know more. Proclaim who God is and tell them what God has done.

Know this, all the knowledge in the world, without prayer will avail you nothing! My pastor, when I went into the ministry, he said, “Boy, can you be alone?” Can you make Him your dwelling place, can you stay with him for a while?

Men, the world needs Christ and a revelation of Christ. Now do your work. Sometimes we need to open our ears and eyes and shut our mouths in order to study and hear.

Men are only converted by the Spirit. We must prophesy the written Word of God.“

More about the Biblical Gospel Message: